Ingredient In The Spotlight: Rose

Anyone who has ever inhaled the fragrance of rose can attest to its intensely narcotic aura. It induces a sense of receptivity & surrender, almost like being ravished. After breathing in its scent, you may, in fact, feel drugged.

The chemical properties of the rose fragrance are complicated & fascinating. Rhodinol gives the rose its powdery & waxy scent. Add to that Geraniol, the familiar scent of geranium foliage, Nerol, the essence of magnolias, and Eugenol, the spicy fragrance which is recognised as the scent of cloves. Along with many other minor ingredients is a large helping of a relatively simple compound called phenyl ethyl alcohol, which is reminiscent of bouquets & honey.

Roses & their essences possess infinite variation. Just as there are avid gardeners who can distinguish many varieties of rose in the dark, an experienced perfumer can distinguish rose absolutes from India, Egypt or France. Roses on any given bush can vary in fragrance at different times of the day, with the intensity increasing just before a storm.  Flowers are therefore hand-picked at dawn before their blossoms open, and their essential oils must be extracted the same day.

The history of the world's most beloved flower is rich & vast. Originally, this divine flower came from the area now known as Iran. Cultivated there since antiquity, this deciduous shrub spread East & West to South Asia & the Mediterranean. In the 6th century BC, the Greek poet Sappho described the red rose as "the Queen of flowers". In ancient Rome, roses were used extensively as visual & olfactory decorations at festivities, while its petals were consumed as food. Records exist of rosewater being used for its medicinal properties since 10CE by Arab physician Avicenna. 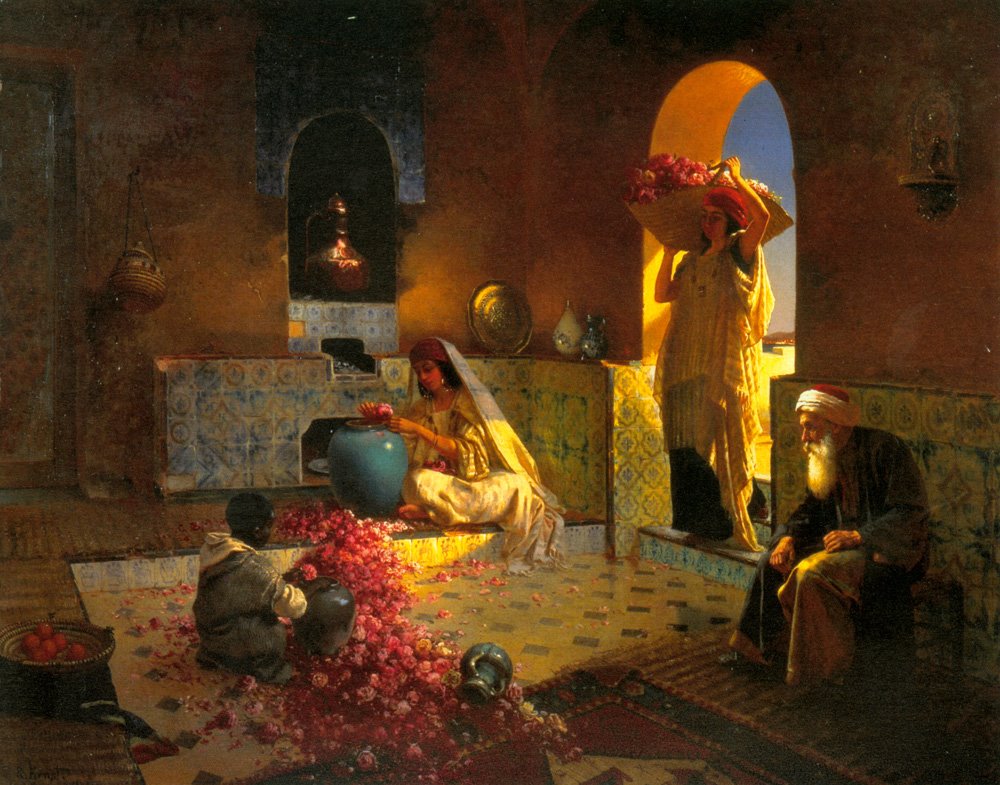 In fact, archaic Arabs probably loved roses even more than we do today. They preserved them by gathering the buds & placing them in earthenware jars, sealed with clay & buried in the ground. When they required roses, the jars were dug up, the buds sprinkled with water & air-dried to allow the petals to open once more. One sultan was so smitten with roses he forbade anyone else to grow them, dressed in pink in their honor & had his rugs sprinkled continuously with rosewater.

By the Middle Ages, the anti-depressive properties of the rose were touted even in Western Europe. The essential oil of the rose, known as "attar of rose" ('attar' meaning 'perfumed' in Persian & Arabic) is used in aromatherapy as a mild sedative & anti-depressant.

Rose hips in country kitchens have been traditionally used to create wine & vinegar, to jams & teas. They are also used to produce rosehip oil, which is widely utilised in skincare products because it is full of vitamins, antioxidants & essential fatty acids that are known to correct dark spots, hydrate dry skin & reduce scars & fine lines.

The Parfum Apothecary adores rose and has created a natural, fine perfume to capture its timeless fragrance.